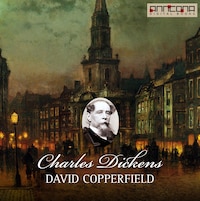 32 h 16 min
LukijaTadgh Hynes
FormaattiÄänikirja
Lajit
RomaanitRomaanitEnglish
Jaa kirja
David Copperfield is the common name of the eighth novel by Charles Dickens, first published as a novel in 1850. Its full title is The Personal History, Adventures, Experience and Observation of David Copperfield the Younger of Blunderstone Rookery (Which He Never Meant to Publish on Any Account). Like most of his works, it originally appeared in serial form during the two preceding years. Many elements of the novel follow events in Dickens' own life, and it is probably the most autobiographical of his novels. In the preface to the 1867 edition, Dickens wrote, ”like many fond parents, I have in my heart of hearts a favourite child. And his name is David Copperfield.”
The story traces the life of David Copperfield from childhood to maturity. David was born in Blunderstone, Suffolk, near Great Yarmouth, Norfolk, England, in 1820, six months after the death of his father. David spends his early years with his mother and their housekeeper, Peggotty. When he is seven years old his mother marries Edward Murdstone. David is given good reason to dislike his stepfather and has similar feelings for Murdstone's sister Jane, who moves into the house soon afterwards. Murdstone attempts to thrash David for falling behind in his studies. David bites him and soon afterwards is sent away to a boarding school, Salem House, with a ruthless headmaster, Mr. Creakle…
Audiobook running time: 32 hours. Unabridged version - 366,098 words - 975 pages in the printed edition.
Charles John Huffam Dickens (1812-1870) was an English writer and social critic. He created some of the world's most memorable fictional characters and is generally regarded as the greatest novelist of the Victorian period. During his life, his works enjoyed unprecedented fame, and by the twentieth century his literary genius was broadly acknowledged by critics and scholars. His novels and short stories continue to be widely popular. Dickens was regarded as the literary colossus of his age. His 1843 novella, A Christmas Carol, is one of the most influential works ever written, and it remains popular and continues to inspire adaptations in every artistic genre. Set in London and Paris, his 1859 novel, A Tale of Two Cities, is the best selling novel of all time. His creative genius has been praised by fellow writers, from Leo Tolstoy to George Orwell and G. K. Chesterton, for its realism, comedy, prose style, unique characterisations, and social criticism.