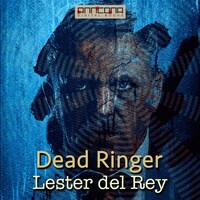 There was nothing, especially on Earth, which could set him free—the truth least of all!

A newspaperman is hounded from his jobs because he keeps trying to report aliens who can't be killed--they heal, even from death – just like zombies.

And now the authorities want to institutionalize him…

Lester del Rey (1915 - 1993) was an American science fiction author and editor. He was the author of many books in the juvenile Winston Science Fiction series, and the editor at Del Rey Books, the fantasy and science fiction imprint of Ballantine Books.

Del Rey was awarded the 1972 E. E. Smith Memorial Award for Imaginative Fiction (for the Skylark) by the New England Science Fiction Association and a special 1985 Balrog Award for his contributions to fantasy, voted by fans and organized by Locus Magazine. The Science Fiction Writers of America named him its 11th SFWA Grand Master in 1990.