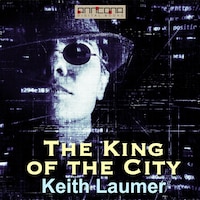 The King of the City

The King of the City is a science fiction novella by American author Keith Laumer first published in 1961.

A fantastic science fiction tale, woven out of the threads of future thinking, by a master of the genre!

He was a sort of taxi-driver, delivering a commuter to the city.

The tank traps and armored cars were the hazards of the trade!

The King of the City was first published in Galaxy Science Fiction, August 1961.

Keith Laumer is known for the Bolo and Retief stories. The Bolo stories chronicle the evolution of super tanks that eventually become self-aware through the constant improvement resulting from centuries of intermittent warfare against various alien races. The Retief stories deals with the adventures of a cynical spacefaring diplomat who constantly has to overcome the red-tape-infused failures of people with names like Ambassador Grossblunder. The Retief stories were greatly influenced by Laumer's earlier career in the US Foreign Service.