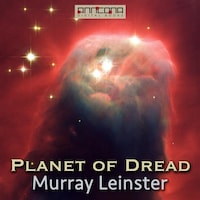 Planet of Dread is a science fiction novella by Murray Leinster first published in 1962.

Moran cut apart the yard-long monstrosity with a slash of flame. The thing presumably died, but it continued to writhe senselessly. He turned to see other horrors crawling toward him. Then he knew he was being marooned on a planet of endless terrors.

Humans have expanded to myriads of worlds throughout the galaxies but they have found that the only way for colonies to be self sustaining, was to reproduce the total ecology of their home world; the original Earth.

This meant bringing the entire ecosystem, the good, the bad and the ugly. Viruses as well as grass, goats as well as stink bugs and allowing the whole mixture to ultimately produce an inhabitable world for humans.

But what happens when this system is not properly supervised?

Moran and the others in the space yacht Nadine find a world where strange things have been brewing for over a hundred years and may or may not survive an environment gone mad.

Planet of Dread was first published in Fantastic Stories of Imagination May 1962.

Murray Leinster (1896-1975) was a pen name of William Fitzgerald Jenkins, an award-winning American writer of science fiction and alternate history. He wrote and published over 1,500 short stories and articles, 14 movie scripts, and hundreds of radio scripts and television plays.