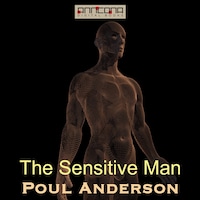 The Sensitive Man is a short science fiction novel by Poul W. Anderson first published in 1954.

Poul Anderson delves into the realm of human potential in this exciting story and asks some penetrating questions for us to think about.
What if psychology finally enabled people to even partially control all those automatic reactions of our minds and bodies?
What if we were not slaves to anger, fear, emotions, hormones, blood pressure and the thousand other things that our bodies 'take care of' from instant to instant?
What if those things could be brought under the control even partially of our reason and minds?
In this story one man stood between a power-hungry cabal and their world mastery—but a man of, shall we say, unusual talents.

The Sensitive Man first appeared in the magazine Fantastic Universe in January 1954.

Poul William Anderson (1926-2001) was an American science fiction author who began his career during one of the Golden Ages of the genre and continued to write and remain popular into the 21st century.