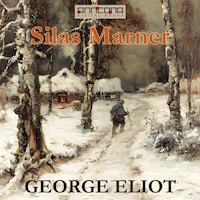 Silas Marner is a novel George Eliot first published in 1861.

Reputed as Eliot’s favourite novel Silas Marner is set in the early years of the 19th century. Marner, a weaver, is a member of a small congregation in Lantern Yard.

Betrayed by a beloved friend and accused of a crime he didn’t commit, awkward Silas Marner is expelled from his beloved religious community - the only community he has ever known.

He exiles himself in the remote village of Raveloe. Friendless and without family, set apart from the villagers by their superstition and fear of him, he plies his weaving trade day after day, storing up gold which becomes his idol.

Mary Anne Evans (1819-1880), better known by her pen name George Eliot, was an English novelist, journalist and translator, and one of the leading writers of the Victorian era. She is the author of seven novels, including Adam Bede (1859), The Mill on the Floss (1860), Silas Marner (1861), Middlemarch (1871-72), and Daniel Deronda (1876), most of them set in provincial England and known for their realism and psychological insight.

In December 2015, BBC Culture polled book critics outside the UK, to give an outsider’s perspective on the best in British literature. Out of 100 listed novels, Middlemarch listed as #1 and Daniel Deronda listed as #70.