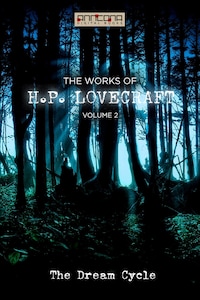 The Works of H.P. Lovecraft Vol. II - The Dream Cycle

537 sivua
KirjailijaH. P. Lovecraft
FormaattiE-kirja
KirjasarjaThe Works of H. P. Lovecraft (osa 2)
Lajit
RomaanitRomaanitJännitysDekkaritScience fictionKlassikot, esseet, novellitNovellit, esseetEnglishFictionCrimeFantasy & Scifi
Jaa kirja
Howard Phillips ”H. P." Lovecraft (1890-1937) was an American author who achieved posthumous fame through his influential works of horror fiction. Virtually unknown and only published in pulp magazines before he died in poverty, he is now regarded as one of the most significant 20th-century authors in his genre.
Horror, fantasy, and science fiction author Stephen King called Lovecraft "the twentieth century's greatest practitioner of the classic horror tale." King has made it clear in his semi-autobiographical non-fiction book Danse Macabre that Lovecraft was responsible for King's own fascination with horror and the macabre, and was the single largest figure to influence his fiction writing.
Lovecraft's fiction has been grouped into three categories by some critics.
Macabre stories (c. 1905-1920)
Dream Cycle stories (c. 1920-1927)
Cthulhu / Lovecraft Mythos stories (c. 1925-1935)
We have divided the H. P. Lovecraft large canon of novels and stories in three volumes;
Volume 1 - The Cthulhu Mythos
Volume 2 - The Dream Cycle
Volume 3 - Horror and Other Stories.
Ten of the 24 stories in Volume 1 and 2 are identical as we prefer to keep the categories intact.
The Dream Cycle refers to a series of stories by Lovecraft that concern themselves with "The Dreamlands," a vast, alternate dimension that can be entered via dreams. In this second collection of H. P. Lovecrafts works; Volume 2 – The Dream Cycle, you will find the following stories, in chronological order by year of writing:
1. Polaris, 1918
2. Beyond the Wall of Sleep, 1919
3. The Doom That Came to Sarnath, 1919
4. The Statement of Randolph Carter, 1919
5. Nyarlathotep, 1920
6. The Cats of Ulthar, 1920
7. Celephaïs, 1920
8. From Beyond, 1920
9. Ex Oblivione, 1921
10. The Nameless City, 1921
11. The Other Gods, 1921
12. The Quest of Iranon, 1921
13. What the Moon Brings, 1922
14. Hypnos, 1922
15. The Hound, 1922
16. Azathoh, 1922
17. Pickman's Model, 1926
18. The Silver Key, 1926
19. The Strange High House in the Mist, 1926
20. The Descendant, 1926, published posthumously in 1938
21. The Case of Charles Dexter Ward, 1927, published posthumously in 1943
22. The Dream Quest of Unknown Kadath, 1927, published posthumously in 1943
23. The Dreams in the Witch-House, 1932
The Dreamlands are apparently divided into four regions:
- The West contains the Steps of Deeper Slumber and Enchanted Wood by which many enter the Dreamlands. Other points of interest include the port of Dylath-Leen, the Dreamlands' largest city; the town of Ulthar "where no man may kill a cat," the coastal jungle city of Hlanith, and the desert trading capital Illarnek. Here, too, lies the land of Mnar whose gray stones are etched with signs and where rise the ruins of the great Sarnath.
- The South, home of the isle of Oriab and the areas known as the Fantastic Realms;
- The East, home of Celephaïs, a city dreamt into being by its monarch Kuranes, greatest of all recorded dreamers, and the dangerous Forbidden Lands;
- The North, location of the feared Plateau of Leng, home of man-eating spiders and the satyr-like "Men of Leng".
Other locales include the Underworld, a subterranean region underneath the Dreamlands inhabited by various monsters; the Moon, accessible via a ship and inhabited by toad-like "moon-beasts" allied with Nyarlathotep; and Kadath, a huge castle atop a mountain and the domain of the "Great Ones".